Those of you born in June, like our daughter Amy, are lucky to have three unique and amazing birthstones to choose from; alexandrite, pearl and moonstone. In this blog I’ll discuss that shimmering beauty, moonstone. I created separate blogs for pearl and alexandrite.

Moonstone’s name was aptly derived from its association with moonlight. The effect which makes moonstone special is technically known as adularescence, an opalescent shimmer of light that appears to billow across the surface of the gemstone’s body, giving it a special glow. This affiliation with moonlight has been described many different ways, including moonstone looks like “moonlight reflecting in water” and “resembles a full moon shining through a veil of thin, high clouds”.

Perhaps the most captivating aspect of moonstone’s opalescent shimmer is its appearance of motion. The misty light seems to roll across the gem’s surface as you change viewing angles. Moonstone sometimes also shows a cat’s-eye effect, a white line which moves along the surface of the gemstone as the light source or the gemstone moves.

Rare in top qualities, this otherworldly gem is derived from one of the earth’s most common minerals, feldspar, which makes up around half the earth’s crust. Moonstone’s delicate beauty and long-established heritage make it perhaps the most familiar gem-quality member of the feldspar group of minerals. 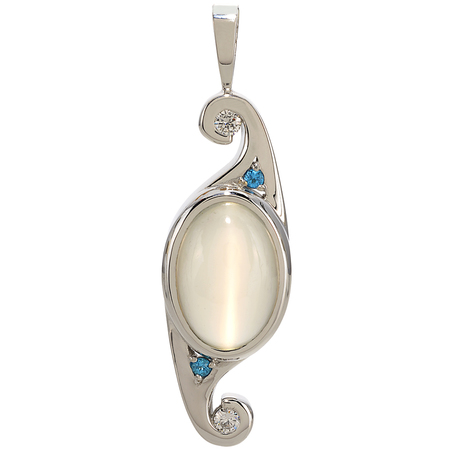 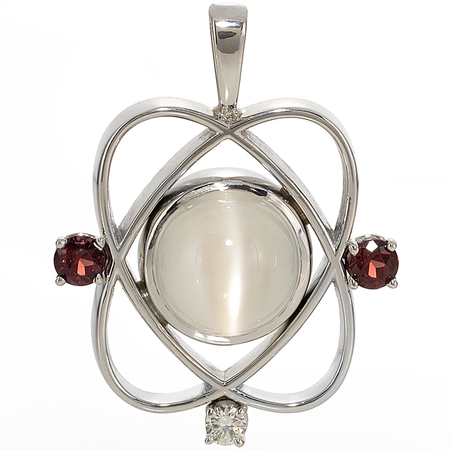 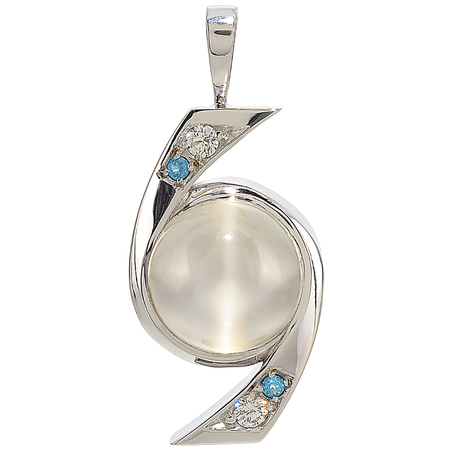 Moonstone was once known as “adularia” after Switzerland’s Mount Adular, one of the first sources of fine-quality moonstone. It has also been associated with the Roman and Greek lunar goddesses, Diana and Artemis. Ancient Romans believed moonstone, with its unearthly shimmer, was created from frozen moonlight. According to Hindu mythology, moonstone is made of solidified moonbeams. For centuries, this gem was regarded as a symbol of love, passion, growth and fertility and was believed to bring luck, especially to lovers.

Moonstone is also credited with calming nerves, strengthening resolve and guarding against recklessness. Many believed you could see the future if you held a moonstone in your mouth during a full moon. Legendary Tiffany & Co. mineralogist and mineral collector, George F. Kunz (1856 -1932), wrote that moonstone brought good fortune and was so highly regarded in India that it was displayed for sale exclusively on yellow cloth, as yellow was a sacred color.

Moonstone was a favorite of artisans during the arts and crafts era (latter 19th and early 20th centuries), who frequently used it in handcrafted silver items. Around that same time, moonstone was often featured in fine jewelry of many Art Nouveau jewelry designers, including René Lalique and Louis Comfort Tiffany. During the 1960’s “flower child” movement, moonstone provided its wearers with the desired ethereal look. New age designers of the 1990’s again turned to moonstone’s natural beauty for inspiration.

While it can be prone to breaking due to its potential for cleaving in two directions, moonstone can be an elegant and affordable addition to any collection. It is best suited for use in earrings, necklaces and pendants. If you’re looking to create a moonstone ring, it’s best to put it in a protective setting.

To prevent scratching, moonstone jewelry should not be stored in a manner where it contacts harder gemstones. Moonstone may crack when exposed to high heat. Therefore, ultrasonic and steam cleaners should not be used on moonstone jewelry. The best cleaning option is warm, soapy water with a soft brush to scrub behind the stone, where dust and debris can collect.

Moonstone occurs in a small range of colors and clarities. Its transparency can vary from transparent to semi-transparent to opaque. Its body color is typically colorless to white, but can also be green, peach, pink, yellow to brown, or gray to nearly black. The gemstone’s adularescent effect can be blue, silver, or white.

Characteristic inclusions in moonstone include tiny tension cracks called centipedes, because of their resemblance to those long, thin anthropods with many legs. In addition to adularescence, some polished moonstones can show cat’s-eye effect and even a four-rayed star.

When buyers select moonstones, they consider:

Most members of the trade agree the most desirable moonstones display a colorless, semitransparent to nearly transparent body as free of inclusions as possible, since they can potentially interfere with adularescence and a vivid blue adularescence (known in the trade as blue sheen).

The finest moonstone is a gem of glassy purity with a mobile, electric blue shimmer, which should be centered on the top of a cabochon, and easily seen from a wide range of viewing angles. If a moonstone’s adularescence is visible only within a restricted viewing range, its value drops.

In 1997, southern India miners discovered a new type of moonstone with a bright green body color, described as “parrot green”. There is also a gemstone known as “Rainbow moonstone” in the market, but it’s actually a different mineral species, labradorite feldspar.

As mentioned earlier, moonstone is part of the feldspar group of minerals, one of the most common and diverse minerals on earth, which makes up around half its rocky crust. You can pick up a rock anywhere in the world, and you’ll probably find it contains a mineral or two from the feldspar group. Twenty-six species of feldspars exist, nine of which are considered gem quality. Feldspar group minerals have been used since ancient times for personal adornment as well as for industrial purposes, especially glass manufacturing.

The intergrowth of two different feldspar minerals, orthoclase and albite, during gem formation are the source of the moonstone’s adularescence. At first, the two minerals commingle. As the newly formed composition cools, the orthoclase and albite separate into stacked, alternating layers about half a micron thick (similar in size to a wavelength of light). When light hits between these thin, flat layers, it diffracts, scattering in many directions and creating a soft silvery white or blue shimmering glow. Below is a moonstone crystal (photo compliments of GIA). 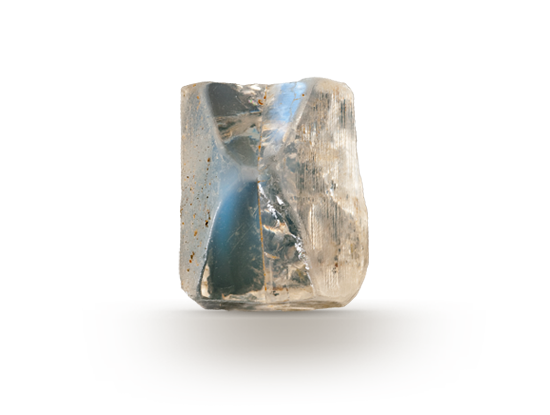 Moonstone can be found in a wide variety of locations, including Brazil, India, Sri Lanka, Madagascar, Myanmar and Tanzania. Other sources include Australia, Armenia, Mexico, Brazil, Tanzania and the United States, where they can be found in the states of New Mexico, North Carolina and Virginia. The most important of these moonstone sources are India and Sri Lanka, where fine moonstone, which is quite rare and becoming rarer, can be found.

Moonstone can be found in a wide range of sizes and carat weights. Fine-quality material is becoming scarce in larger sizes. The most common cutting style is a cabochon, a shape that displays the color and shimmer of its adularescence well. The cabochons are usually oval shaped, but other interesting shapes can also be found. When cut as a cabochon, the stone’s dimensions should be uniform, and the profile shouldn’t be too flat. Flat cabochons don’t display adularescence well and have little value. Following is a photo of a moonstone cabochon, compliments of GIA. 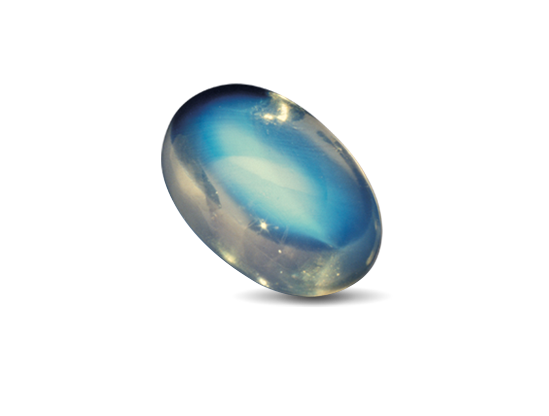 Moonstone is also cut into beads for strands. Fine transparent moonstone has also been faceted. However, because of its low hardness, it doesn’t display the best brilliance. Moonstone is popular for carving into decorative jewelry elements, such as cameos or the popular “man-in-the-moon” face that plays on the gem’s name. The uneven surface of the carving combines with the shifting adularescent sheen to create an intricate and lively effect.

It’s common practice for the Smithsonian Institution to have a display at the annual American Gem Trade Association (AGTA) GemFair show in Tucson. A few years ago, I photographed the necklace seen below at their display. 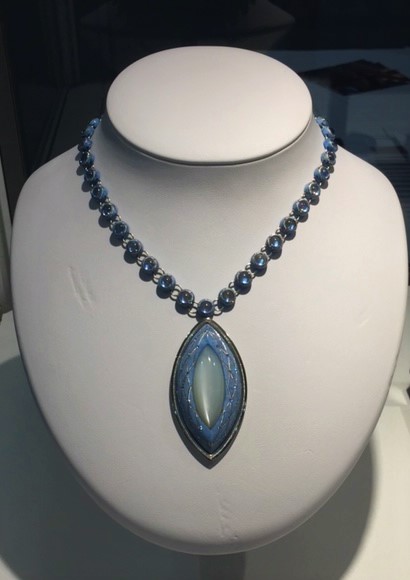 This moonstone and diamond necklace set in platinum and bronze was designed by renowned jewelry artist Zoltan David and created by Mr David and goldsmith Brian Kruppenbacher. The necklace won an AGTA Spectrum award in 2016 and was gifted to the Smithsonian in 2017 by Zoltan and Patti David. The focal point of the necklace is the 35.63 carat marquise-cut cat’s eye moonstone. Thirty-five ½ carat round cabochon moonstones also play a key role in the necklace’s design, along with 164 ideal cut diamonds totaling 1.20 carats.

Credit American Gem Trade Association, the Gemological Institute of America and Gemworld International for their  contributions to this blog.

Those of you born in June, like our daughter Amy, are lucky to have three unique and amazing birthstones to choose from; alexandrite, pearl and moonstone. In this blog I’ll discuss the breathtaking gemstone, alexandrite, exemplified by the stunningly beautiful Whitney Alexandrite, as seen here and described in the Famous Alexandrites section at the end of the blog.    [...]

May Birthstone: Emerald - facts and lore

Emerald, for millennia, has set the standard for all green colored gemstones. The word emerald is derived from “smaragdus”, ancient Greek for green, making the words green and emerald literally synonymous. Emerald’s color is associated with the lushest landscapes and the richest greens. It symbolizes springtime, with its renewal, rebirth and regeneration of life. When one thinks of emeralds, the lush green [...]

April’s birthstone, diamond, has a long history as one of the world’s most sought-after and treasured gemstones. Formed entirely from carbon, it’s the only gemstone consisting of a single element. It’s also the hardest material on earth, 58 times harder than anything else in nature. [...] 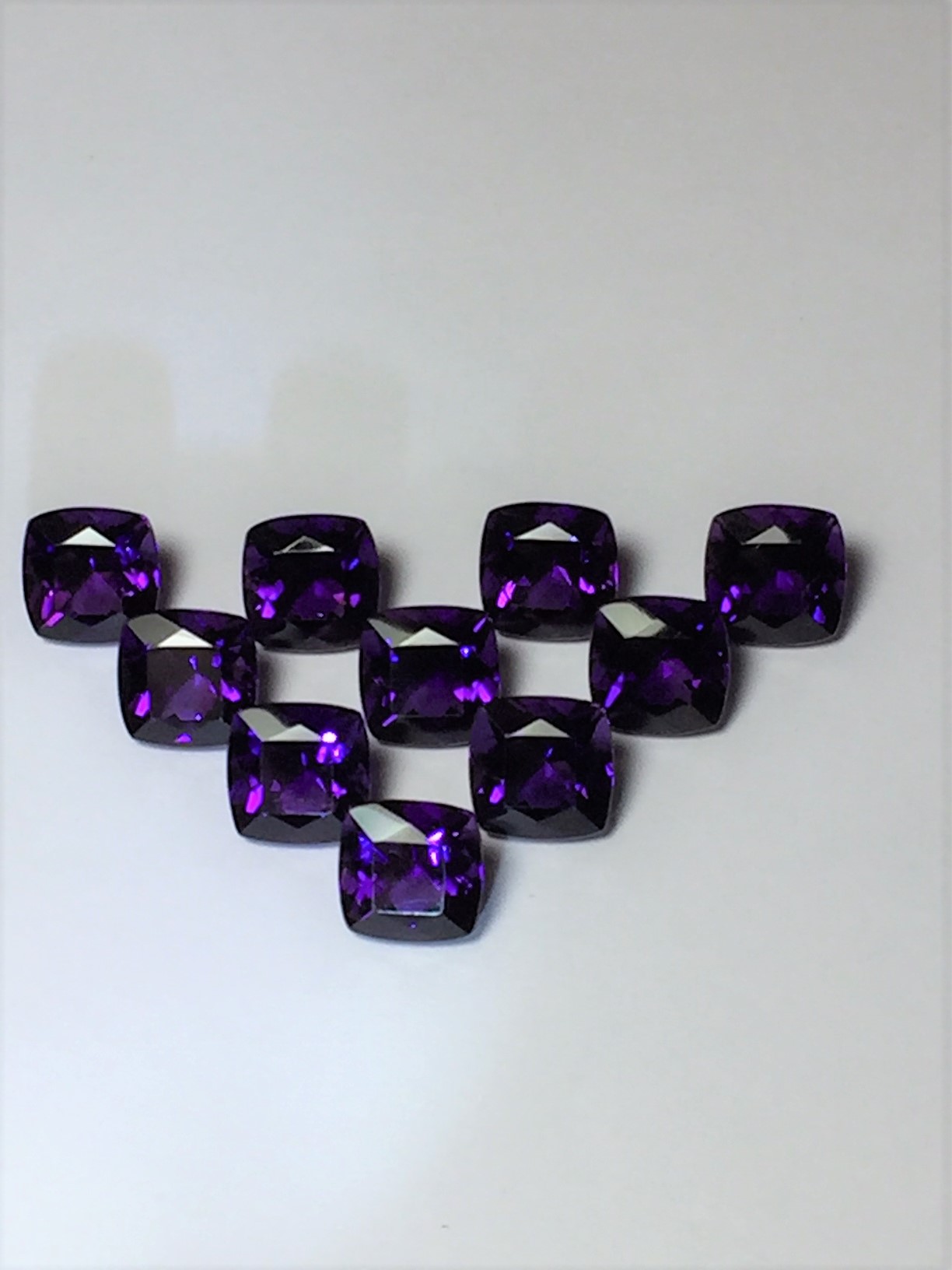 Amethyst is the purple, and most rare and popular variety of the quartz mineral species. If you were born in February, like our daughter, Allison, you probably already know it as your birthstone. For those who believe it’s a thing; amethyst also is the favored gem for celebrating 6th and 17th wedding anniversaries. While you may be familiar with [...] 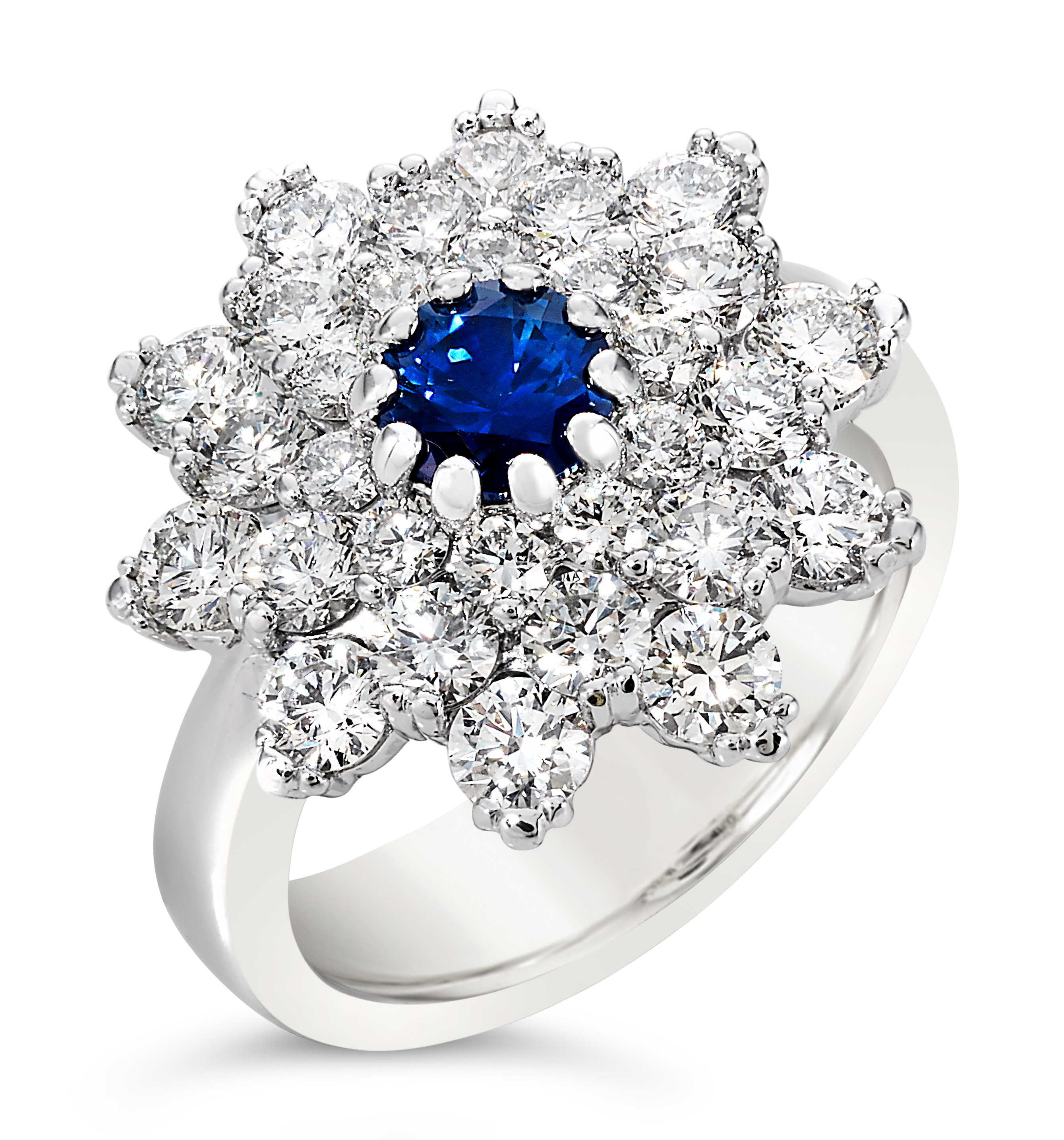 What are white gold and rose gold?

Natural gold’s unique yellow color makes it easily recognizable, as seen in the above picture and in our yellow gold jewelry. White gold was originally developed as a more affordable alternative to platinum. White gold is [...] 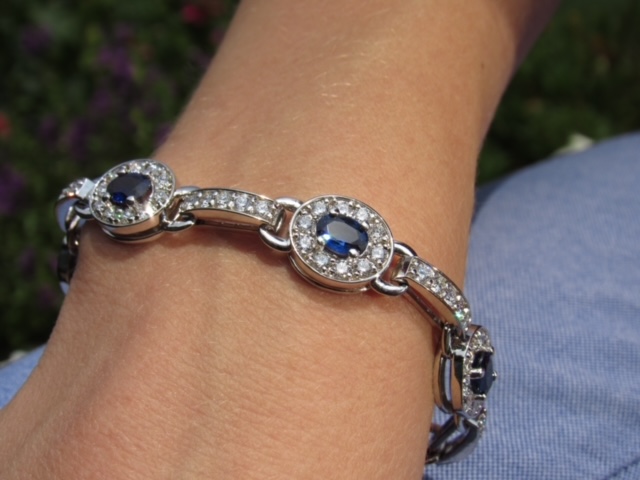 In the About Our Designs section of the website, I discuss the inspiration for my jewelry designs, as follows: “Inspiration for a design can come from anywhere. You name it, anything in my surroundings or life experiences can ignite that creative spark: a gemstone, travel, architecture, science, nature, shapes, colors and so forth. I never know what will capture my imagination.” [...] 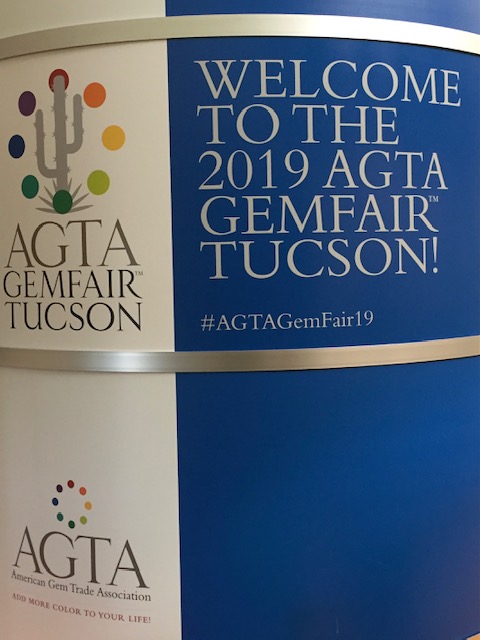 As I’ve mentioned in previous writings, my fascination with colored gemstones was the motivation behind pursuing my GIA gemologist certification. Through GIA, I became aware of the American Gem Trade Association (AGTA) and its primary purpose of ethical promotion of colored gemstones and pearls. AGTA’s annual trade show in Tucson, Arizona is their premier event. I applied for an [...]

How Living In Thailand Sparked My Interest in Colored Gemstones

I’ve been asked how living in Thailand sparked my interest in colored gemstones. Here’s the story:Before moving to Thailand, I traveled to Bangkok a few times on business. It was quite common that whenever US headquarters staff visited our Thai operation, we would return home with two things; custom tailored clothes and fine jewelry. Thailand has many skilled tailors, some of [...] 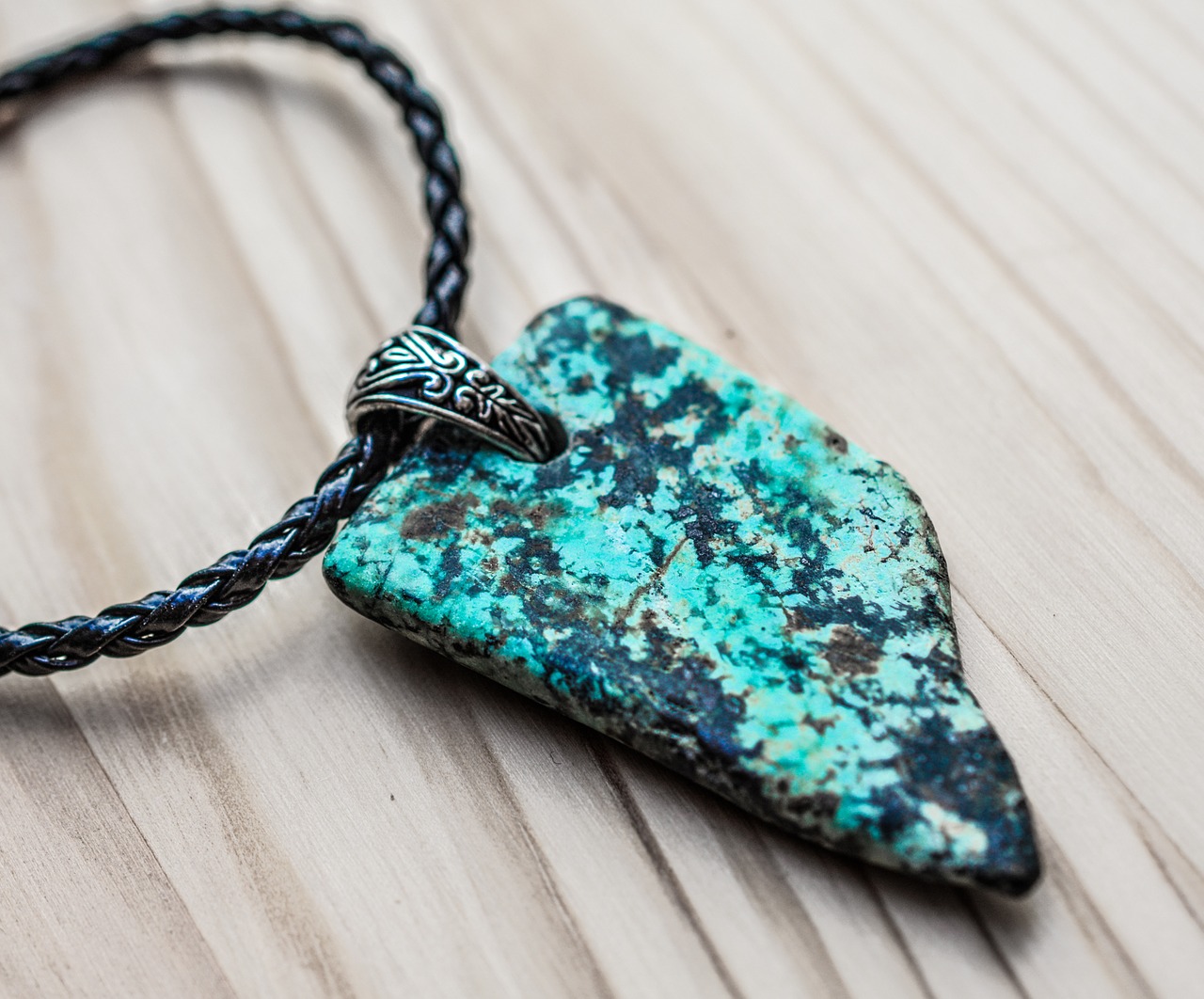 What is the cultural importance of Turquoise?Discovered by ancient Egyptians, turquoise was widely used in treasures fit for pharaohs. Old Europeans credited turquoise with helping achieve a higher state of consciousness. Tibetans revered the gemstone as a talisman (an object, typically an inscribed ring or stone, thought to possess magic powers and bring good luck) [...]