Those of you born in December, are triply blessed with birthstone choices, with tanzanite, zircon and turquoise. If blue is your favorite color, these three birthstones provide a wide variety of shade choices. If blue isn’t your color, you’re still able to choose from bright red, yellow, green, purple and brown gems. These very different gemstones also offer a wide range of jewelry possibilities. This blog provides information about zircon, while tanzanite and turquoise are covered in separate blogs.

Zircon is a colorful gem with bright, lustrous diamond-like sparkle. It’s best known for its brilliant blue hues, but also is found in warm yellows, oranges and reddish browns, as well as red and green colors. Zircon is a popular gemstone among collectors and knowledgeable consumers due to this array of colors. Colorless zircon is renowned for its brilliance and flashes of multicolored light, called fire, which are so similar to diamond’s that, for centuries it was confused with diamond. It’s unfortunate that even today, the name zircon combined with the stone’s fire and brilliance, causes this lovely natural gemstone to be confused with cubic zirconia, a manmade synthetic material often used as a diamond simulant.

Natural zircon contains trace amounts of radioactive impurities. This from the Zircon Industry Association: “Zircon has been present in the earth’s crust since its formation some 4.5 billion years ago. As a natural mineral, zirconium silicate (zircon) is mined from the earth’s crust and, like many rocks and minerals, zircon contains low levels of uranium and thorium atoms locked inside its crystal structure. Such minerals are called “naturally occurring radioactive materials (or NORM)”. …..Interestingly, the NORM property of zircon is very useful. For example, zircon plays an important role in radiometric dating of ancient rocks as the entrapped uranium acts as a reliable clock within the zircon, making it possible to accurately date rocks that were formed in the earliest period of earth’s history. Therefore, zircon is radioactive, however, radioactive levels are low, similar to that of other naturally-occurring sources such as granite………and are not significantly greater than background levels normally found in the environment. .….the amount of radiation emitted is very low and well below what is considered to be acceptable safe levels. To put this into context, you would be exposed to a higher dose of radiation if you had a chest x-ray or took a long-haul flight. So, while zircon is a NORM, it poses no risk to public health.”

Virtually all zircons used in jewelry are high zircons with full crystal structures.

At 100 East Fine Jewelry, we featured matching blue with a hint of green zircon gemstones in the design of this scintillating pair of earrings, which are sure to turn heads. 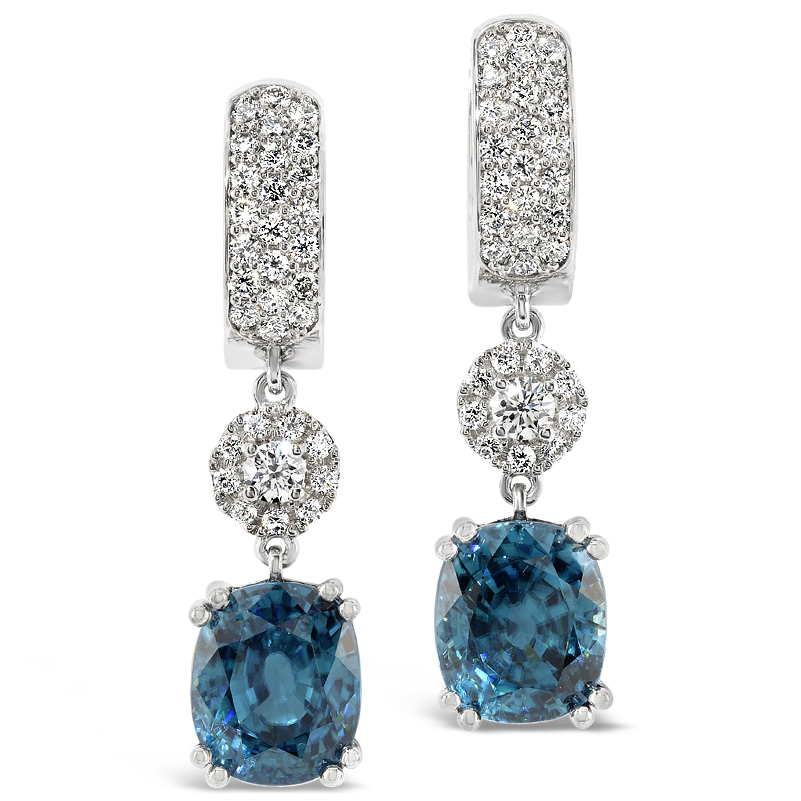 Zircon is one of the most ancient materials on Earth. The origin of the name zircon seems to be up for debate. Some scholars believe it’s derived from the Arabic word "zarkun", meaning cinnabar or vermilion. Others think the Persian word "zargun", which translates to gold hued, is the name’s source. Considering zircon’s color palette, either derivation is possible.

Zircon has been a popular gemstone throughout history. For centuries, colorless zircon was considered a convincing substitute for diamond before the synthetic materials, cubic zirconia and moissanite, were developed. All other zircon colors were valued on their own merit, in part due to their fiery nature.

During the middle ages, zircon was believed to lull one into a deep sleep and scare off evil spirits. It was also thought to bring prosperity, honor, and wisdom to its wearer. In the Hindu religion, zircon alternates with hessonite garnet as one of the nine gems of the navaratna. The following information about the nine gems of the navaratna was found in an article for GIA by Alice Keller and Terri Ottaway entitled Centuries of Opulence: Jewels of India. “Worried about your livelihood? Suffering from a chronic illness? Desperate for money or power? The navaratna (“nine gemstones”) was one of the most powerful talismans in the Hindu religion, one that was eventually adopted by Muslims as well. The nine gems represent the celestial bodies of Indian astrology—Sun (ruby), Moon (pearl), Mercury (emerald), Mars (coral), Jupiter (yellow sapphire or topaz), Venus (diamond) and Saturn (blue sapphire)—and the rising (zircon or hessonite) and descending (cat’s-eye) nodes of the moon.

Set in jewelry in a prescribed arrangement, they protect the wearer from the negative energies of the planets and strengthen the positive benefits of the different gems, bringing good health, wealth, mental strength and wisdom. When the gems are set in a circular pattern, the ruby (sun) is traditionally in the center, as it represents the center of the solar system. As quoted in S. M. Tagore’s Mani-mala, all the gems “must be high-born and flawless.”

At the time navaratna was introduced, believed to be during the 10th century, all these gem materials were found on or near the Indian subcontinent. In fact, India’s history of diamond mining and pearl fishing extends back more than 2,000 years; in ancient times, large portions of its coastline were protected by vast coral reefs. Today the eastern state of Orissa alone produces ruby, sapphire, emerald (beryl), garnet, topaz, zircon and cat’s-eye chrysoberyl. The gems of navaratna represent the natural treasures of this ancient civilization.”

Prized as a talisman (an inscribed ring, stone or similar object thought to possess magic powers and bring good luck) since medieval times, zircon was believed to clarify the mind, improve confidence and inspire the spirit. Victorians had a fondness for blue zircon. Fine blue zircon gemstones were featured in English estate jewelry from the late 1800’s. Also in Victorian times, certain zircon gemstones with a smoky appearance were popular gems for mourning jewelry. One of the most brilliant non-diamond gems, colorless zircon was widely used as a lower-cost diamond alternative in the nineteenth century. More recently, famed gemologist George Kunz, Tiffany and Company’s gem buyer and vice president of gemology from 1879 until his death in 1932, was a notable zircon advocate. He once proposed the name “starlite” to promote the gem’s fiery nature, but the name never caught on.

Despite its array of beautiful colors, zircon is not a commonly known gemstone among jewelry buyers. For those familiar with zircon, it’s especially admired for its attractive blue colors. Zircon also comes in an array of earth tones such as cinnamon, sherry, yellow, orange, and red. Heat treatment is commonly used to produce blue and colorless zircon varieties, as well as orange, yellow and red. The various shades of the blue variety represent the vast majority of all zircon sales. Orange, green and red hued gemstones, while not very common in the market, are reported to be experiencing increased demand. Generally speaking, zircon supply is limited.

Most faceted zircon gemstones used in jewelry today are free of eye-visible inclusions. Those containing eye-visible inclusions sell at a discount. Many untreated zircons have a cloudy or smoky appearance which, if extreme, also reduce the stone’s value. Rarely, zircon might contain long parallel inclusions that create a cat’s-eye effect when cut as a cabochon. Still rarer yet, a color change zircon exists.

Zircon has a higher specific gravity than many other gem species and varieties, which means it weighs more than many same sized gemstones. So, you should expect a 1 carat zircon to appear smaller than most other 1 carat gemstones. The weight range of finished zircon gemstones is color dependent. Blue and green stones normally range up to ten carats, yellows and oranges up to about five carats, with reds and purples being generally smaller. Fine quality zircon is rare in large sizes.

Despite its relative hardness, zircon is a brittle gem. Heat treatment can make it even more brittle. To protect the gemstone, zircon is often set in pendants and earrings instead of rings and bracelets. Also due to this brittle nature, zircon jewelry should be stored with care as its facets can chip and abrade easily if they come in contact with other gems. Like all fine jewelry, it’s especially important to avoid wearing zircon jewelry in rough conditions, such as while gardening, playing sports or doing dishes.

Ultrasonic and steam cleaning zircon is not recommended. We believe all your gemstone jewelry is best cleaned with warm, soapy water and a soft tooth brush. We consider this a single, safe method to use for cleaning all gemstone jewelry. For additional details, please read our blog; Cleaning Fine Gemstone Jewelry. To learn about caring for all your fine jewelry, please read our blog; Caring for Fine Gemstone Jewelry.

Zircon occurs in a rainbow of colors which rivals both sapphire and tourmaline. Its wide and varied palette of yellow, orange, green, red, brown and blue hues makes it a favorite among collectors as well as informed consumers. Zircon also comes in a colorless variety which was confused with diamond for centuries, as mentioned above.

The most valuable colors of zircon are blue, bright red, and green. Zircon’s brilliant blue hues represent around 80% of all its sales. Almost always the result of heat treatment, blue zircon’s color range runs from slightly greenish blue to pure blue. Blue zircon’s popularity results in higher per carat prices compared to other zircon colors. The most popular zircons are a fiery vivid blue, which compares favorably with cuprian tourmaline. Stones with lower saturation or lighter blue tones command lower prices. Industry analysts believe blue zircon has yet to reach its full market potential.

Zircon’s warm yellowish and reddish brown hues complement fashion trends which feature autumnal and earth tones. Red and green zircons have value as collectors’ stones, as does the rare cat’s-eye zircon which occasionally appears on the market.

Colorless, blue and red zircon are very rare in nature. Most zircon crystals leaving the mines are yellowish or reddish brown which are heated, some multiple times, to take on blue, colorless or strong red, yellow or orange hues. Natural, untreated zircon boasts an array of earthy browns, yellows, strong greens and bright reds.

Heat treated zircon gemstones are known for holding their color permanently. They are also considered durable and permanent under normal handling conditions. Subjecting gemstones to intense heat may render them slightly more brittle than usual, and care must be taken not to damage pointed faceted corners and edges.

Zircon gemstones are not made synthetically. 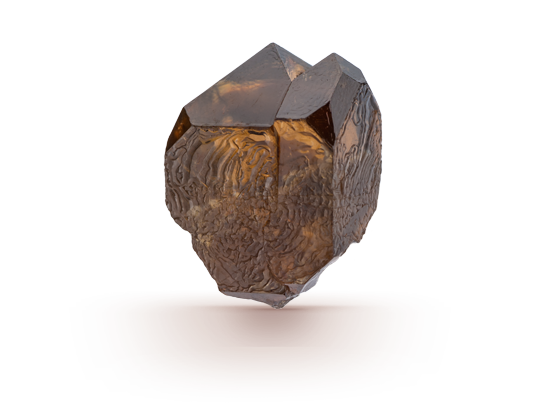 Zircon crystals grow in many different rock types; commonly in igneous and metamorphic rocks. Most zircon is mined in Cambodia, Sri Lanka and Australia. It has also been found in Madagascar, Vietnam and Myanmar. Supplies of zircon from Southeast Asia and Madagascar are considered sufficient to easily support today’s entire market demand. Cambodia is the primary source for heat treatable zircon, which is sent to Thailand for cutting

Early in the last decade a noteworthy amount of zircon from Tanzania entered the market. This material has a slightly orangey rich brown color with a strong pink component; a color not traditionally seen in the major sources of Sri Lanka or Cambodia. For this reason, the market was particularly excited about the material.

Zircon is often found near sapphire sources, with Sri Lanka, Australia, Myanmar, Vietnam and Cambodia falling into this category. Australian zircon is the oldest mineral on earth, at 4.4 billion years old. Australia’s Harts Range is known for producing yellow-brown and orangy brown crystals. 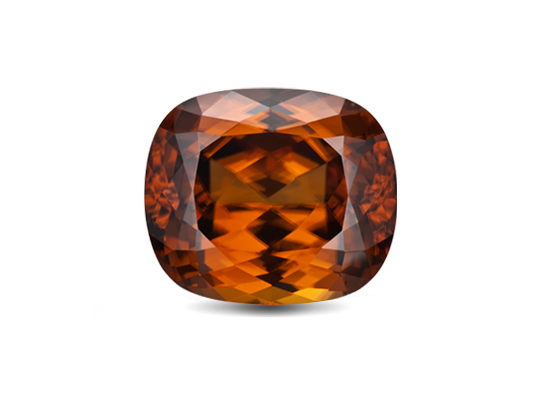 Zircon is a challenge to cut because it’s so brittle. To maximize brilliance, zircon is mostly cut in round and oval shapes. A modification of the brilliant cut, known as the “zircon cut,” uses eight extra facets around the gem’s pavilion. This isn’t seen very often today because of the extra labor costs involved. Zircon can also be found in step cuts, which have rows of parallel facets, and mixed cuts, which are a combination of brilliant and step-cut facets.

The Smithsonian Institution National Museum of Natural History has a 30 carat pink-brown rectangular cushion cut zircon gemstone in its collection along with other zircon pieces set in jewelry.