Those of you born in June, like our daughter Amy, are lucky to have three unique and amazing birthstones to choose from; alexandrite, pearl and moonstone. In this blog I’ll discuss the breathtaking gemstone, alexandrite, exemplified by the stunningly beautiful Whitney Alexandrite, as seen here and described in the Famous Alexandrites section at the end of the blog. 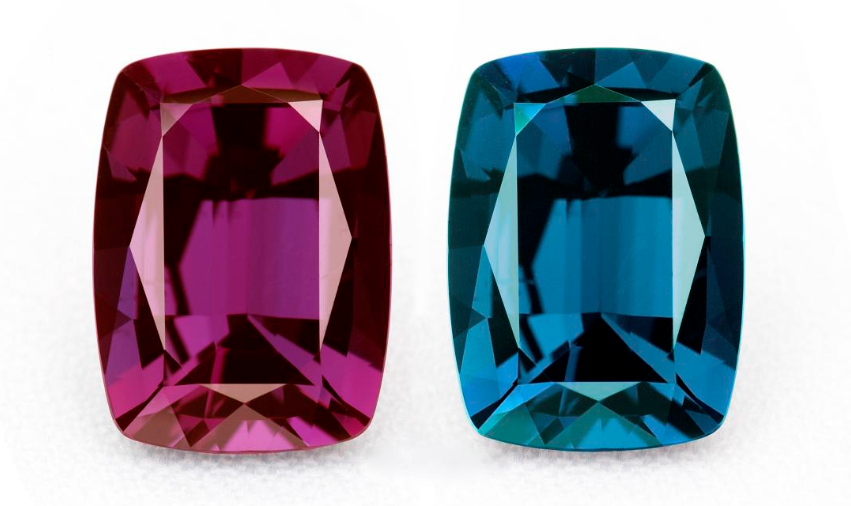 Alexandrite is a fascinating gemstone that many people would love to own, but because it's so rare and expensive, few people do. Because of its famed magic trick of color-change, alexandrite has been romanticized as “emerald by day and ruby by night”. This rare variety of the mineral chrysoberyl acquired its fitting title because of the complex way it absorbs light, causing color change. Outside in daylight, it’s a deep forest green color. Inside in candle or incandescent light, it’s a deep merlot red. I saw a display at an AGTA Gem Fair show where an alexandrite dealer alternated light sources back and forth between fluorescent and incandescent and the alexandrite gemstone instantly switched between green and red. I took the following photos of the stone’s two colors. 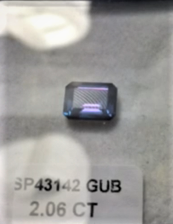 Besides being a June birthstone, alexandrite also is the recognized gift for the 55th wedding anniversary.

The combination of beauty, celebrity, and rarity helped shape alexandrite’s mystical aura. Some reports suggest it may have been discovered in Russia as early as the late 1700s. However, the consensus account is that Russian miners first uncovered alexandrite in the Ural Mountains around 1833. Initially thinking the stone was an emerald, it was sent to renowned Finnish mineralogist Nils Gustav Nordenskjold for evaluation. He accidently discovered this unusual green gemstone changed color and was not emerald, but instead something new and unique. Those original Russian stones were excellent quality, demonstrating very distinct color change from green to purple red.

In 1834, a Russian count named the new gemstone variety in honor of the heir apparent to the Russian throne, Alexander II (1818–1881), to honor his 16th birthday. Alexander II ascended to the throne as Czar of Russia in 1855 and is best remembered for emancipating Russia’s serfs in 1861. Alexandrite’s connection to the Czars likely helped enhance the gem’s prestige by association. Alexandrite’s red and green color combination also contributed to its popularity because it mirrored imperial Russia’s military colors, causing it to catch the country’s attention and become its national gemstone.

Russia remained the only source of alexandrite until deposits were discovered in Sri Lanka at the turn of the 20th century. Sri Lankan alexandrite appears green in daylight but more of a brownish red than plum red in incandescent light. In 1987, alexandrite was discovered in Brazil, which grew to become the most significant source of alexandrite in today’s market. While Brazilian material’s color change is not as dramatic as some of the finer Russian alexandrite, it can still be very pronounced. Alexandrite deposits were also discovered in Zimbabwe and India at the beginning of this century. However, they produce only limited amounts. Gemologists are hopeful for future alexandrite discoveries, but due to the unusual conditions required for alexandrite formation, experts generally agree that future discoveries are unlikely.

Since its discovery almost two centuries ago, alexandrite has been one of the most rare and cherished gemstones of all. In the 1950s, alexandrite joined the list of birthstones as the modern alternative to June’s traditional pearl.

Since its discovery, alexandrite was thought to bring love, luck and good fortune. It was even worn as an amulet of good fortune. Alexandrite is said to increase happiness and love and encourage romance. It is believed to provide greater emotional balance, self-esteem and confidence, allowing joy to enter the lives of people with too much self-discipline. It is said to remind of our purpose in life and our origin, giving hope to those who are in despair and bringing strength and awareness of nature’s interconnectedness.

Alexandrite is thought to provide pleasant surprises and success in speculative endeavors. It increases mental clarity, perception, and memory and enhances verbal skills, communication and the ability to choose the right words.

Natural alexandrite is so rare and expensive, few people have ever seen, let alone own one. For many years, alexandrite was almost impossible to find. Newly mined alexandrite rough material is extremely rare, scarcer than diamond, ruby or sapphire. The main source of large, natural alexandrite gems today is antique jewelry. Fine alexandrite gemstones, including some of the famed Ural Mountain material, can most often be found in estate jewelry and at auction. Material with a certificate of Russian origin is still particularly valued by the trade.

With a hardness exceeded only by diamond, sapphire and ruby, alexandrite is a very durable stone, suitable for any jewelry setting. It is a particularly good choice for rings and other every day wear pieces. Because of this durability and extreme rarity, alexandrite is an exceptional choice for an engagement ring or a legacy jewelry piece. While alexandrite is a durable gemstone, because of its value, it should be well cared for. If you're interested in learning more about caring for your fine jewelry, please read our blog Caring For Fine Gemstone Jewelry.

Alexandrite jewelry should be cleaned regularly to remove any dirt or oils that can affect its brilliance. We recommend cleaning at home using a solution of warm and gentle dish detergent. For additional details, please read our blog Cleaning Fine Gemstone Jewelry.

Other gems are known to change colors in response to a light-source change, but alexandrite’s transformation can be so striking the phenomenon itself is often called the “alexandrite effect.”

Russian sourced material remains the standard by which all other alexandrite color comparisons are measured. Alexandrite from the newer, non-Russian, sources tend to exhibit colors that are distinctly different than those most often associated with Russian material.

Good quality alexandrite tends to contain few inclusions. Its value rises dramatically for clean material with good color change and strong colors. When certain types of long, thin inclusions orient parallel to each other, they can create a second phenomenon called cat’s-eye effect (technically known as chatoyancy). Few gems are as fascinating – or as stunning – as cat’s-eye alexandrite thanks to showing two phenomena in a single gem.

Many gems are treated to improve their color or clarity. There are no known treatments to enhance the beauty of alexandrite.

Due to alexandrite's rarity, many simulants (aka imitations) and synthetics (aka laboratory grown) have been found in the market since the early 1900s.

A considerable market exists for alexandrite simulants; less expensive, look-alike products. These imitations should not be confused with synthetics, which are real alexandrite, just grown in a factory instead of naturally in the ground. Some simulants are created legitimately to make attractive costume jewelry for people who want the look of fashionable jewelry without the high cost. Unfortunately, some simulants are created with the intent to defraud others. Examples include:

Synthetic (laboratory-grown) alexandrite has been manufactured using a number of processes since the 1960s. These lab-grown stones have the same chemical, optical and physical properties as natural alexandrite. They are real, just not created in nature. Although this lab-grown substitute is far less costly than natural alexandrite, it still ranks among the most expensive synthetic gemstones. A considerable market has developed for this material.

Buyer beware. If you find alexandrite at a relatively bargain price, it’s quite possibly not natural or not alexandrite at all. A professional gemological laboratory can make a determination.

To form, alexandrite requires both beryllium, one of the rarest elements on earth, and chromium. Further complicating things, these two elements rarely reside in the same rocks or geological conditions. This combination of circumstances necessary for formation ensured the gem would be extremely rare. Experts generally agree future new discoveries are also unlikely for these same reasons.

Between 1840 and 1900, Russia’s Ural Mountains were the singular source of alexandrite. The region was mined so extensively the deposit was thought to be nearly depleted by the turn of the 20th century, when deposits were discovered in Sri Lanka. In 1987, alexandrite was also discovered in Brazil and later in Madagascar, Myanmar and Zimbabwe. Today, most alexandrite comes from Brazil, Sri Lanka and East Africa. None of these sites produce as rich and vivid a color change as the original Russian source. Mines in the Urals recently re-opened but only a few carats of gem-quality material are extracted each year.

Here’s an example of an alexandrite crystal. 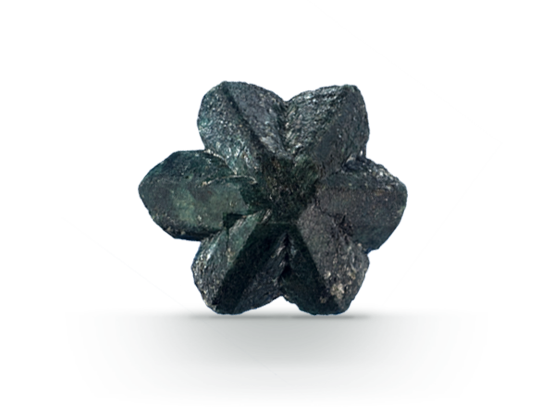 Most gemstones cut from alexandrite are small, weighing less than one carat. Larger sizes and better qualities rise in price dramatically. Fashioned gemstones up to 5 carats were traditionally found only in the Ural Mountains. The largest gems with Russian origin weigh as much as 30 carats. Deposits in India and Sri Lanka have produced a few large specimens, but any alexandrite over 3 carats is highly unusual. Much of the Brazilian alexandrite is smaller, although 1 to 2 carat gemstones can be found.

Alexandrite’s rarity dictates it be cut to save weight. When fashioning alexandrite, cutters try to orient the gem to show the strongest color change through the crown. It’s most commonly fashioned into mixed cuts; displaying brilliant-cut crowns and step-cut pavilions.

Chrysoberyl is well-known for its chatoyancy or “cat’s eye” effect when cut as a cabochon. As members of this species, alexandrite can also show a cat’s eye effect, necessitating it also be cut into a cabochon. 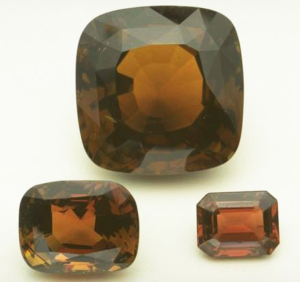 Because of its rarity, we do not design and make alexandrite jewelry. Click the link to browse the entire current 100 East Fine Jewelry Collection.